Our mission is to raise funds and award scholarships to graduating seniors who plan to continue their studies in the fine or performing arts in college.

Giving back to the community

Each year since 1956 the Neshaminy Valley Music Theatre has produced a full Broadway-type musical stage show. The proceeds of the production contribute to a scholarship fund which is awarded to graduating seniors of the Neshaminy School District who plan to continue their studies in the fine or performing arts.

We are very pleased to have awarded a total of four grants for 2021 and are most proud to announce the following recipients of our 2021 scholarships. 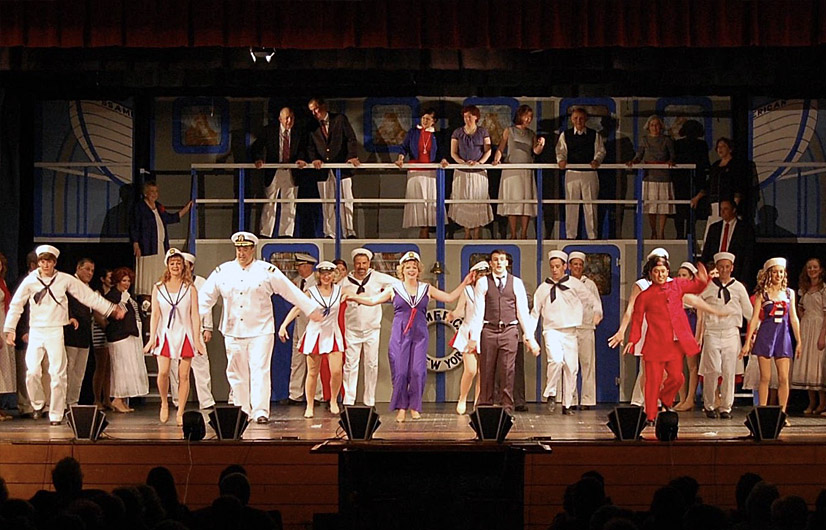 Since its founding, NVMT has awarded more than $155,000 in scholarship grants to deserving students.

Kate’s career goal is one day to be a professional performer. Upon graduation from the Theatre Arts Program at Rider University, she plans to jump head-first into auditions and the lifestyle of performing hoping to perform on cruise ships, theatres throughout the nation and, one day, on Broadway. Kate is a vocal merit scholarship recipient at Settlement Music School and was awarded Outstanding Vocalist at Temple University’s 2020 Ellington Jazz Festival. She has trained in voice, acting, ballet, tap, modern and jazz dance; plays piano, saxophone and guitar; and, besides English, speaks Russian and Spanish. She performed in featured roles at the Kelsey Theatre, the Barn Playhouse, the Village Playbox, Rethink Theatrical as well as at Neshaminy High School and Neshaminy Summerstock.

Grace is enrolled in Rider University’s Bachelor of Fine Arts Musical Theatre program, minoring in Arts and Entertainment Industries Management. She plans to prepare herself to enter the field as a working performer after college. Grace has been active in the Neshaminy High School Dramatics program for her three years in high school, has served as President of the Neshaminy High Drama Troupe and as student officer for the PA Thespian Board. She is also a member of the elite group of NHS theatre students called the Roadies. Grace has participated in several community service activities including Counterparts in Hope, a benefit to aid members of the theatre community who had been furloughed due to the pandemic.

With a field of study concentrating on music education, Yasmine will be attending Valley Forge University in Phoenixville, PA. A talented singer and actress, Yasmine is passionate about music and has performed in countless musicals and plays.  Her goal is to impact in a positive way the lives of others though music and teaching and to help her students by improving their skills and providing motivation to chase their dreams. Yasmine someday would like to teach in an urban setting reaching out to students of diversity in culture, national origin, race and beliefs. An excellent student, she has earned Distinguished Honor Role every marking period while at Neshaminy High School and has continued to challenge herself by selecting rigorous academic courses. Extracurricular activities include Yasmine’s participation in Friends Helping Friends Club, an anti-bullying club that promotes acceptance and inclusion.

Cody will attend Coastal Carolina University pursuing a Bachelor of Fine Arts in Musical Theatre. His career goal is to perform professionally as an actor and singer once he completes his college education. Besides maintaining academic success, Cody kept a busy extracurricular schedule and was active in Drama Club, Select Choir, Gym Night, Concert Choir, Men’s Choir and was a member of the elite group of NHS theatre students called the Roadies. He also served as Vice President for the Drama Troupe and participated in Counterparts in Hope, an organization that benefits members of the theatrical community who have been furloughed due to the pandemic.

Look for NVMT’s ANNIE to be presented Spring, 2020. Evening performances on Fridays and Saturdays; matinees on Saturdays and Sunday!